Chris Snyder: “The Rest of the Story” 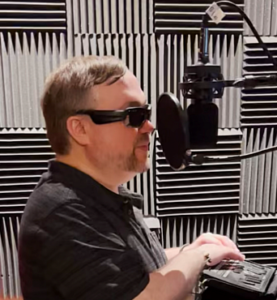 I was born totally blind. I was born at a time when doctors told the parents of kids like me that we would always be developmentally delayed, that they couldn’t expect much from us, and that we would always have to be looked after as we would never be able to hold down jobs, all because we didn’t have functioning eyes. Fortunately for me, my parents refused to accept that prognostication of my future, and so they, together with my two older siblings, chose a different path.

They talked to me, sang to me, read to me and stimulated my senses as much as possible. I turned out to be my mother’s youngest walker at seven months old. I have a cassette tape from the week before my second birthday that my grandmother recorded where I speak clearly and form full sentences. Needless to say I defied the doctor’s expectations of a blind child. I was already reading Braille at four years old, and I went on to mainstream schools where I participated in the gifted program all through elementary school.

As an adult, I’ve voiced a character in a children’s animated series and a number of other characters in full cast audio dramas. I’ve narrated and produced thousands of hours of audio description for television, film and streaming services as a narrator, talent director and audio engineer. I have won multiple awards for my narration and audio production. None of it would have been possible without both the support of my family in those critical early years, and the books I read that stimulated my curiosity and imagination.

Between my family reading to me, the Braille books I read and the countless audio books I listened to, I acquired a deep love for the written and spoken word; for tone, timbre, and timing, for the nuances that turn a good narration into a great narration. As a child, I read the classic children’s books like Winnie the Pooh, The Wonderful Wizard of Oz, Peter Rabbit and The Little Engine that Could. I read and heard other stories of aliens, sailors, wizards, ordinary people and talking animals on grand adventures. Imagine my surprise when many years later, I learned that those books had pictures!

My parents had gotten me books with different tactile drawings and representations, and  I had several scratch and sniff books, but it didn’t occur to me that the stories I heard had pictures to go with them as a matter of course. When I discovered this, I thought what a shame it was that other blind kids likely had no clue about the pictures that seemed to accompany every book written for children. Enter Imagination Storybooks!

I had spent nearly twenty years of my life working in audio description for television and film, and it always felt very rewarding. I could serve my own community by providing a service that expands the enjoyment of entertainment for millions. When I learned about Imagination Storybooks, my passion to help my community was kindled anew, for I realized that I could serve kids like I had been, and we could give them the rest of the story.

Imagination Storybooks, (formerly Imagination Videobooks,) is a non-profit which is committed to creating and providing fully accessible children’s literature for kids who are blind, deaf and hard of hearing, or neuro-diverse.

We create an audio version of the story, then add vibrant audio descriptions of the illustrations. We then add both closed captioning and American Sign Language for deaf and hard of hearing people. Not only do these features help children, they also allow parents who are disabled to engage fully with the books along with their non-disabled children. Audio description also assists neuro-divergent people, allowing them to engage more fully with the media.

We have so far produced over one hundred accessible children’s books. We have partnered with the Described Captioned Media Program, DCMP, to create the ASL and closed captions. We also have an award winning podcast called Illustrated Audio Books with the Storybook Wizard, and we have begun to roll out our audio books to major platforms like Audible. You can visit us at: www.imaginationstorybooks.org to learn more about all we do.

We have much more planned for the coming new year. We are a non-profit, and our continued work depends on donations from people who understand the vital role that storybooks play in early childhood development, and who understand that our mission of providing accessible books for all children depends on a large community of good people working together.

These kids deserve the same kind of early opportunities I received, but too many parents will listen to the naysayers, especially when they lack the time and resources that my family was lucky to have. Together, we can provide a place where their children can grow and learn. Perhaps they may grow up to be award-winning audio engineers or voice actors. Perhaps they will be the first disabled person to land on the moon or make a new scientific discovery. One thing is for certain: with your help, we can ensure they will be educated, stimulated, and inspired.